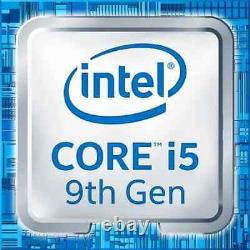 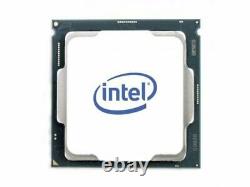 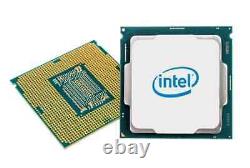 Intel core i5-9500, intel core i5, lga 1151 (location h4), 14 nm, intel, i5-9500, 3 ghz. The intel® turbo boost technology dynamically increases the frequency of the processor as needed, taking advantage of the thermal and electrical reserve to bring excess speed when needed and improved energy efficiency if not. Eligibility of the intel® vprot platform. Intel® vprot technology is a set of security features and management simplicity built into the processor that addresses four key areas of IT security: 1 the management of attacks, including protection against malicious rootkits, viruses and programs; 2 the protection of identity and access points to websites; 3 the protection of confidential, personal and professional data; and 4 remote and local monitoring, intervention and repair of PCs and workstations. Intel® vt virtualization technology (vt-x) allows a hardware platform to split into multiple virtual platforms.

Intel® transactional synchronization extensions new instructions (the new instructions for intel® transactional synchronization extensions) refer to a set of instructions focused on multithread performance staggering. This technology improves the efficiency of parallel operations through better software lock control. The intel® 64 architecture ensures 64-bit calculations on servers, workstations, pcs and mobiles when the platform is combined with compatible software. 1 Intel® 64 architecture improves performance by allowing systems to exceed the 4GB barrier to address virtual and physical memory. The set of instructions refers to the set of basic commands and instructions that a microprocessor understands and can execute.

Extensions to the set of instructions means additional instructions to improve performance when the same operations are performed on several data objects. These extensions may include streaming simd extensions and avx (advanced vector extensions). Inactivity states, "c" states, are used to save energy when the processor is inactive. C0 is the operating state, when the processor has a useful activity. C1 is the first state of inactivity, c2 the second, and so on.

The improved intel speedstep® technology builds on this architecture and uses design strategies such as separation between voltage and frequency changes, and partitioning and clock recovery. Monitoring technologies protect the processor package and the thermal failure system through thermal management functions. An integrated digital thermal sensor (dts) detects the courtyard temperature and thermal management features reduce the electrical consumption of the package, and thus the temperature, as required, in order to stay within the normal operating limits. Intel® technology for identity protection. Intel® identity protection technology is an integrated security token that provides a simple and inviolable method to protect access to online data about your company and your customers from threats and fraud.

This technology relies on hardware to uniquely identify a user's pc and prove to websites, financial institutions and network services that the attempt to connect does not come from malicious software. Intel® identity protection technology can be a key component of two-factor authentication solutions to protect your information when connecting to websites and corporate networks.

This item is in the category "Computers, computer networks: components, parts\cpu, processors". The seller is "lefefedu83" and is located in this country: en. This item can be shipped to the following country: france.